Summary of Repression and Human Rights Violations in Iran – July 2020

Maryam Rajavi and the Struggle for Gender Equality in Iran 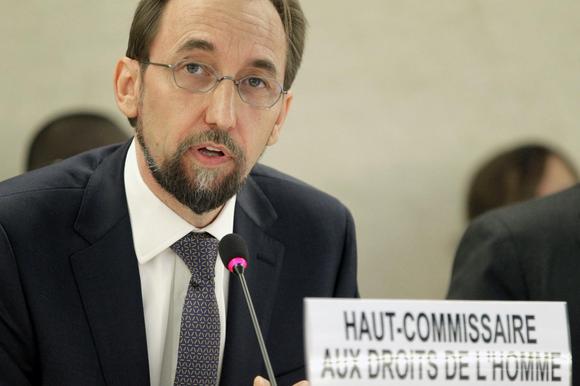 GENEVA (Reuters) - The new U.N. human rights chief called on Monday for the world to protect women and minorities targeted by Islamic State militants in Iraq and Syria which he said were "increasingly conjoined conflicts". NCRI - Students wishing to study in Iran's graduate schools need the approval of the regime's intelligence ministry, a state-run news agency has reported. The Committee for Accuracy in Middle East Reporting in America (CAMERA) has called attention to the assessment of religious rights organization, “In Defense of Christians,” regarding the persecution of Christians in Iran.

A Dutch-Iranian human rights activist, Abdullah al-Mansouri, has been released from prison. The regime had sentenced him to death on false charges of terrorism in 2007, before commuting the sentence to 15 years in prison, and then unexpectedly releasing him after only half that time. Mansouri arrived back in the Netherlands on August 20, at the age of 69, still unaware of why he had been released.

The AFP reported on Friday that bilateral talks were continuing for a second day in Geneva, between the United States and Iran, but that no new information had leaked out of the first day’s discussions. It may be that the participants are particularly tight-lipped at this stage, or it may be that no noteworthy progress had been made towards bridging the gap between contrary positions. No doubt this latter possibility contributed to the reported uncertainty regarding whether the bilateral talks would end on Friday or continue into the weekend.

The problems that have likely been exhibited at those talks are sure to be exacerbated by this week’s news that there has been little recent progress in the International Atomic Energy Agency’s probe into Iran’s nuclear program. As was widely anticipated, the IAEA acknowledged this lack of progress in a report on Friday, which also highlighted concerns about construction activities that have been observed at the Parchin military site, according to Reuters and the AFP. That site has long been suspected to have links to the military dimensions of the Iranian nuclear program, and for just as long Iran has denied IAEA inspectors all access to the site.

That denial is just one item in a long list of defiant activities and statements that Iran has displayed throughout the negotiating process with the five permanent members of the UN Security Council, plus Germany. An editorial published in Vice News provides a fairly comprehensive list of these actions and statements, in order to support the observation that Iran is still not cooperating, regardless of its continued presence at the negotiating table.

Most, if not all, of the Iranian actions highlighted in the essay should be familiar to readers of Iran News Update. They include persistent demands for unrestrained uranium enrichment capability, refusal to dismantle or substantially reconvert the Arak heavy water plant that could provide a plutonium pathway to a nuclear weapon, insistence on a short duration of any final deal that is signed, and refusal to consider any limits to Iran’s ballistic missile stockpiles.

This apparent intransigence from Tehran contributes to a decline in the probability of the negotiations coming to a successful conclusion. This, at least, is the contention of Cliff Kupchan, a policy expert with the Eurasia Group. Kupchan formerly estimated the chances of a deal at 60 percent, but as of Friday he has reduced those chances to only 40 percent.

Quartz presents Kupchan as someone who is interested in a moderate assessment of the diplomatic situation between Iran and the US. As such, he is prepared to levy blame on both sides if the deal is not completed, saying that hardliners in both camps will torpedo the process in the event that another extension is required. Yet at the same time, Kupchan’s memo on the topic seems to acknowledge that the current difficulties facing the negotiations stem primarily from the Iranian side, where “statements by top officials have become considerably harsher over the past two months.” NCRI - Former U.S. Secretary of State Henry Kissinger said an interview on Saturday that the Iranian regime "is a bigger problem than ISIS." because Iran has a stronger footing in the Middle East, it has a greater opportunity to create an empire under the Shiite label in that region. NCRI - The Iranian regime's authorities have arrested an Ukrainian national for sabotaging at the country's Bushehr nuclear power plant, a state-run newspaper reported on Sunday.

The National Council of Resistance of Iran (NCRI) called on Tuesday for United Nations Security Council resolutions to be reinstated against Iran and for the International Atomic Energy Agency (IAEA)...
Read more

The uprising of the Iranian people and the rebel youth in November not only set the stage for a new cycle of developments but also had a significant impact on...
Read more

In recent months and following the U.S. withdrawal from the Iran nuclear deal, which is also called the Joint Comprehensive Plan of Action (JCPOA), Iranian officials were hoping to blackmail other signatories of the accord to offer economic privileges. The Iranian government has made genuine efforts to persuade France, Germany, and the...
Read more

Summary of Repression and Human Rights Violations in Iran – July 2020

Human rights groups continue to report torture and execution in Iran’s prisons and the Tehran regime’s failure to adhere to basic human rights norms. Below is a summary of human...
Read more

Several political prisoners in Iran have been attacked in recent days by ordinary prisoners incited by prison authorities. On Tuesday, August 4, prisoners of conscience Behnam Mahjoubifar and Behnam Mousivand were brutally...
Read more

Since the beginning of this year, at least 100 death sentences have been carried out by the Iranian regime’s judiciary ordered by Ebrahim Raisi, the head of the Judiciary. These sentences...
Read more

The mullahs in Iran are worried that their proxy group Hezbollah is losing its standing in Lebanon, following the explosion that killed more than 200 people in Beirut last Tuesday...
Read more

Why Does the Iranian Regime Fear US-Iraq Talks?

When Qassem Soleimani was killed by the United States near Baghdad airport in January 2020, it was concluded that the course of events promised an end to the interference of...
Read more

Iranian Regime’s Crisis of Dominance in Lebanon and Syria

Every day that goes by, the Iranian regime’s dominance in counties which it sought to turn into centers for “confronting the global imperialism” is fading more and more. Despite the fact...
Read more

Iran: There Is No Lesser Evil Anywhere in the Leadership

By INU Staff INU - President Hassan Rouhani won his second term last month. He was up against Ebrahim Raisi (the candidate preferred by Supreme Leader Khamenei). However, Rouhani’s election has...
Read more

Iranian President Hassan Rouhani is facing mounting pressure at home and abroad which, according to Reuters, may affect his ability to run the country. Reuters notes that Rouhani, who was re-elected...
Read more

Although many believed that Supreme Leader Ali Khamenei was preparing conservative cleric Ebrahim Raisi to be his heir by placing him in the presidency, the election results gave Hassan Rouhani...
Read more

The Rt Revd Dr. Barry Morgan, a former Archbishop of Wales, has praised the Iranian Resistance, specifically the People’s Mojahedin Organization of Iran (PMOI/MEK), for their commitment to the religious...
Read more

Maryam Rajavi and the Struggle for Gender Equality in Iran

Maryam Rajavi, the president of the National Council of Resistance of Iran, has been leading the struggle for freedom and gender equality in Iran for the past decades. Of course, of...
Read more

As the Iranian regime grapples with multiple domestic and international crises, particularly facing a restive society, it is important to know more about the Iranian Resistance and its program for...
Read more

The Iranian regime executed a young woman on Sunday, August 2, the state-run press reported on Tuesday, which brings the total number of women executed since 2013, when President Hassan...
Read more

The Women’s Committee of the National Council of Resistance of Iran (NCRI) has published a study into the suppression of Iranian women, entitled “A network of 27 state agencies suppresses...
Read more

Iran – The Women’s Ward of Ahvaz’s Sepidar Prison: Women Commit Suicide to Die or Rest for a Few Days

Sepidar Prison, in the southwestern Iranian city of Ahvaz, is one of the dreaded prisons of the Iranian regime, which is facing dire conditions, and for this reason, during the coronavirus...
Read more

On December 8, the administration of Iranian President Hassan Rouhani published the 2020-2021 budget bill, triggering a new round of infighting among Iranian officials. Significantly, Rouhani’s allies and opponents agree that...
Read more

By Edward Carney On Tuesday, IranWire published an article that attached a dramatic figure to the closely-related issues of Iran’s escalating economic crisis and the corruption of entities in both the...
Read more

By INU Staff INU - Iraq has significantly reduced its imports from the Iranian Regime in the past month, according to an economic-focused newspaper published in Tehran. The report notes that part...
Read more

While the Iranian people are struggling with the effects of the coronavirus outbreak, which has deeply affected their daily life mostly their insignificant incomes, the regime is playing with missile...
Read more

The monthly report of the Organization of Petroleum Exporting Countries (OPEC) on 16 April states that the Iranian regime's crude oil production in March decreased by 52,000 barrels per day...
Read more

Stevenson: IMF Should Not Give Iran $5B to Fight Coronavirus

The former member of the European Parliament Struan Stevenson has warned the International Monetary Fund against sending Iran $5 billion in emergency aid to fight the coronavirus (COVID-19) pandemic.  Stevenson, the...
Read more

Labour protests have continued across Iran this week, as people from different sectors gather to demand their rights, including the payment of long-delayed wages and pensions. On Tuesday, workers from Iran's...
Read more

The strike by Iranian workers of oil, gas, and petrochemical facilities and refineries, which started on 1 August 2020 at Parsian Refinery and Lamerd Petrochemical, continued with the joining and...
Read more

Summary of Iran Protests in July 2020

As the coronavirus expanded and the economic situation of the society became more complicated last month, different strata started protesting, gathering, and striking. In July 2020, some 237 protest movements...
Read more

GETTING TO KNOW IRAN'S REVOLUTIONARY GUARDS

Estimating Support for the...

THE STORY OF THE 1988 MASSACRE IN IRAN